I’ve been making appeals and it seems to be going nowhere. The MessyHot instagram profile NEVER posted anything that violated community standards. It ended up being deactivated anyway. For now you can follow @messsyhot_com // http://instagram.com/messyhot_com

The second sailing of FriendShip was everything I had hoped it would be. I was reminded of the amazing vibes present on the very first Holy Ship. Gary has done an amazing job of treating shippers to a vacation filled with amazing experiences and perfect vibes. I have to admit, I wish the lineups would be a little bit more diverse musically, but I understand that to sell staterooms you have to cater to the mainstream a great deal. I know that it’s entirely unlikely, but I am still holding out faith that one day we will have Happy Hardcore on ship! You are missing out if you’ve never been on a cruise that is also a rave. I’ve been on a normal cruise in the past, and now having experienced what Destructo has created, I can’t imagine being able to do so again. I’ll make an effort to do a more detailed recap eventually, but for now, it’s off to the land of post-production for this photographer!

A fan of my work had suggested that I should look to the slapstick silent film era for inspiration. I definitely have some fond memories of watching the three stooges shorts. I also feel a strong emotional pull from ragtime piano and Charlie Chaplin films. The obvious solution to a problem that probably didn’t exist, was to ask Mitomoro to produce a track that was a hybrid of 1990’s era happy hardcore with ragtime piano while I got to work on making a messy video. The resulting work was greater than I could have anticipated. This happy hardcore ragtime silent film is definitely the current messyhot masterpiece!

The models Honey Heptane, Stevie Mae, and Adore were able to stretch their acting legs and with this assignment. Originally utilized to deal with the shortcomings of the medium that was silent film, overacting was used to great effect with this release. You will be delighted with a load of slime and plenty of pie to the face action.

I have released the SFW content on YouTube as the music video for the track, and for those with a taste for nudity with their mess, CLICK TO BUY THE FULL NSFW VERSION!

There’s been a LOT going on in the MessyHot world lately. Things are tough when you juggle 4 jobs. One of the AMAZING things is that the work I did with Lum caught the eyes of a documentary series called “Sex Life” on epix! Season 1 Episode 6: Sugar High features the adventures of Clix and Lum as we shoot a cake scene on the rooftops of Los Angeles. If you have cable service with on demand you can watch it there, or you can use the Epix NOW app and watch it on any of your connected devices! 2019 has been an amazing year for MessyHot so far and it just looks to be getting better!

The nominations are in and its official – MessyHot has been nominated for two awards this year! The votes are largely determined by voting and so I now ask for help from all of the MessyHot fans. Click Here to vote for Best BEST CLIP ARTIST and Click Here to vote for Best Rave Shoot. You can vote once a day so here’s your chance to make a HUGE difference in the future of MessyHot. Last year Lum and I won best rave shoot. It would be amazing to lock up a second year in a row of awards. Consider this my request for assistance. If MessyHot wins one, or even better BOTH of the awards, I’ll figure some super special give-aways to make it worth your while for having voted. Im thinking maybe I’ll release a couple of sets for free. In other news, this past weekend Bubble Bobble 11: The quest for more foam went amazingly this past weekend. There were live performances by Lum, Honey Luv, Daizy Cooper, and Zaturn. Stay on the lookout here for photos and videos.

This year, I’ve been nominated for MULTIPLE categories at the AltPorn Awards! I’ll also need as much help as I can get with all of your votes! In additional news, without being able to give too much away, I can let you all know that MessyHot was recently privileged to be involved in a sexuality documentary, and the results couldn’t have been better. Bubble Bobble is coming up this weekend! The world is all kinds of amazing right now! Full details incoming! Make sure you go to http://azfoamparties.com and grab your bubble bobble tickets before they’re sold out!

Since so many of the fans have asked for, I’ve embraced some production using slime/gunge. I did a few amazing scenes recently with Lum and Chikkin and they’re now available at MessyHot on UMD. These sets were both shot in normal light and blacklight using the UV reactive slime from MessySupplies. I’m still working on figuring out which gallery system I’ll be using here. Balancing MessyHot with the day job and rave promotion while trying to maintain a social life is an interesting task! There is however a lot of new content coming to the UMD site to go with all of the recent stuff which has been averaging an update every other week at longest. Check out these couple of previews if you’d like to see how the slime turns out:

It’s official,  but I still can’t believe it. Friendship is over, and the return to reality has begun. I spent a lot of time taking photos, as that is kinda what I do, but made sure to take every opportunity I could to stop and dance.  My absolute favorite set was definitely  RÜFÜS DU SOL live in the theater. If you got one of my nifty lenticular business cards, or maybe grabbed a sticker featuring FanBoat Betty (the cute anime girl holding a cake) and found your way here…. welcome to cake porn! Over the next couple of days I’ll be editing photos and getting them web-ready, while also swinging my pickaxe in the information technology mines at my day job. That means it may be a minute or two until I get the photos online, but they’re coming. I also did an AMAZING slime shoot with Chikkin in Miami right before sailing, so my work is cut out for me. Just in case you don’t already, you can follow me on INSTAGRAM and TWITTER to keep up on all your cakey needs.

There’s a vintage description for a fellow with a bunch of jobs or responsibilities which I’ve always enjoyed. He’s often referred to as “a man who wears many hats.” As much as it applies to me, the fact that I hate wearing hats because they cover my head tattoos keeps me from using it. Something some of you may not know about me is that, in addition to producing some fabulous sploshing and WAM content, I am also an IT professional and rave promoter, having thrown my very first in 2007. That was the year of the very first Lingerieve, making 2018’s event Lingerieve 12.

There were many things that made this year’s Lingerieve rank among my favorites of the events I’ve put on, but I’ll try and sum it all up. It may be an over repeated trope, but in the end, it is really all about the music, and Lady Faith absolutely DESTROYED with one of the most energetic hardstyle sets I have had the privilege to behold.  Dark Mark was another stand-out of the night, giving every bit of energy possible to show exactly why he has earned a spot on so many of my lineups. Mangled  (the duo consisting of Maromi and Jangles) also presented quite the memorable set, keeping the energy levels high, while maintaining the sexy feel of the event.

One critical factor in the night’s success, was the support provided by MyFreeCams. Thanks to their kindness, a majority of our audience was treated to bags filled with all kinds of amazing swag, including: slippers, lighters, keychains, bottle openers, mini vibrators, tank tops, panties, and a WHOLE LOT MORE. My phone was buzzing for days afterwards with messages expressing how awesome it was to have so many unexpected treats included with their admission. Giving my attendees a better experience than any other promoter can is one of my driving ambitions, and my ability to do so was enhanced by the magazine giveaways by AltStar Magazine which is the magazine of AltPorn.net and  Blue Blood coming out to provide photographic press coverage for the event.

I did my best to pause, catch my breath, and immerse myself in the experience from time to time, but as the promoter guy, my time surplus was at an absolute minimum.  As a photographer, it’s super hard for me to be at an event, and resist the urge to document it, but I simply didn’t have the time while also handling my promoter duties. That being said, I’ll leave you with the a few photos that I did manage to capture, along with the wrap up video. I really hope to see you all at my next event!

Since inception, MessyHot has been the go-to source for the most amazing cakeporn around. Ok… Maybe I’m the only guy making cake porn on a continual basis… Anyway, a little while back, a customer asked if I would be wiling to film a slime video for him. I took on the challenge, sourced some slime ingredients, and got to work. The results have actually been pretty fantastic. I’ll drop a few preview pictures here. Don’t forget you can go to shop.messyhot.com to buy the full photo and video sets and use the code MHWEB15 at checkout for 15% off because you came in through the main site. That can be combined with the still going buy-3-get-1-free clip sale! And because MessyHot has deep roots in the rave scene, it would only be logical that we do lots of uv reactive black light slime! It took a lot of thinking to come to the conclusion that yes, slime will definitely be a welcome addition to the MessyHot repertoire. I will never abandon cake as the primary vector of messy expression, but the fans have spoken and it looks like gunge is here to stay! 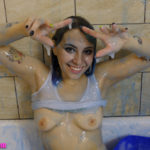